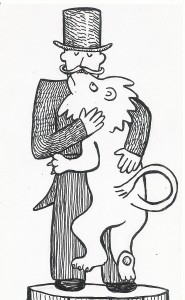 Not exactly the caption you want to be using in a blog devoted to, well, pictures – but I was having a bad drawing day, and alas, sometimes things just do *not* work out.

So yes, I am well aware that this looks like a man in a full-on snog with a rather unconsenting lion. Sorry about that. HOWEVER. In my defence, it is not in fact an endorsement of bestiality, nor of any type of unwilling or even slightly hesitant snoggery;   I am not even sure about mutually heartfelt and ecstatic snoggery, given my uncertainty over whether lions are actually able to give any consent in such matters, beyond eating the snogger I suppose. So, no. Instead, I maintain that this is my brave attempt at rendering a confused lion tamer putting the lion’s head into his mouth (instead of vice versa.) Yes yes I know. It doesn’t work.

I did try to do it from the side but the poor lion tamer had to thoroughly unhinge his jaw and it was creepy; then I did it with the lion tilting its head sort of sideways from the front, which looked like it had had its neck broken and was horrifying; then with a tiny lion only that was like something out of a nightmare. So really, you got the best out of a series of increasingly disturbing images and should be grateful it’s no worse than it is.

The take-home lesson? Sometimes you’ve got to try, try, try again and then …STOP. Really, it wasn’t very funny in the first place.

5 thoughts on “This is not what it looks like”