Unless underwater rhinoceroses and their friends are very very small, in which case it’s just a duck.

Sooo let’s pretend I hadn’t forgotten to finish this story, and see if I can get it finished in 3 pictures or so. ^_^ 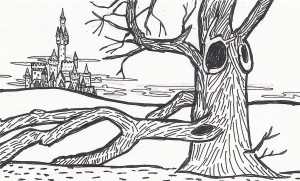 So Mary Toft was a lady who looked nothing like this BUT in the early 1700s  became sort of infamous for giving birth to live rabbits, which is a much more interesting way of gaining fame than we have in the boring 2000s and ought to be replicated via reality TV as soon as possible – you saw it here first. She even managed to convince the Royal Surgeon himself that she was the real deal, which is pretty impressive.

And okay, after extensive investigation they eventually found a rather conveniently-placed rabbit hutch etc and everyone had a good laugh at the Stupid Doctors so Gullible Haha, but just how COOL is it to think of a time when Science is only just tottering around on baby feet trying to figure itself out, and everything looks so strange through this new lens of looking-at-stuff-objectively, and while you’re pretty sure humans generally give birth to humans, what with there being no rabbits in your immediate family tree at least,   no one has really studied this properly before and WHAT IF THEY DON’T and gosh those definitely ARE rabbits in her skirt, that is EVIDENCE right?

It’s an episode in history that is mostly a joke, but in its own way I think of it as a triumph of science; not the  result, not the boring ‘I told you so’ ending, but that openness to possibilities, the  willingness to question and investigate. What a tragedy it would have been to dismiss it out of hand, smug with dogma and ‘I know what I know’ – you’re back in the Middle Ages, Science stillborn, its questioning spirit miscarried. Instead, there it is, twitching its cheeky rabbit nose, legs tangled in some lady’s dress.

So congratulations,  Nathaniel St Andre, Royal Surgeon and author of A short narrative of an extraordinary delivery of rabbets. Hold your head up high and rise as an inspiration to scientists everywhere!

Just, maybe, you know, work on your fact-checking. Just a bit.

So I wanted to draw two elephants lovingly sharing a bar of chocolate; but it seems that elephants prefer ice creams. And don’t share.

Still, you learn something every day and all that…