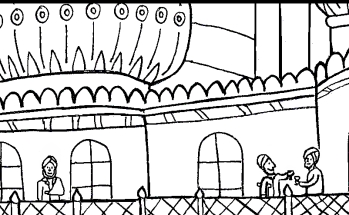 So here’s a sneak peek at what I’ve been working on lately – a colouring book of Brighton, an absolutely lovely place everyone should come visit at least twice in their lives, because the first time it will probably rain but Brighton does not believe in rain and therefore the visit won’t count. The colouring book is A4, so you can imagine the amount of nonsense I can cram in there – hence just some cutouts for you!

These bits are from our most famous tourist attraction: the Brighton Royal Pavilion, a palace/oriental fantasy/party house made for George IV. It is, needlessly to say, an utterly ludicrous building, sort of Indian-y on the outside and cheerfully mish-mashed Chinoiserie on the inside. It contains (among *many* other things) a chandelier dragon that is so heavy it actually had to be integrated into the structure of the ceiling lest it bring the roof down. In my own highly realistic depiction, the thing is flying around with a friend, because confining dragons inside is mean.

The dudes on the right are Indian soldiers, as the Pavilion was used as a military hospital for them in WW1. The combination of war, wounds and what the why is there a dragon this surgery has iron palm trees and what’s with the optical illusions everywhere whyyyy was undoubtedly compounded by medically administered opiates, and historians have collected many joyous/concussed quotes by soldiers wondering if they’d managed to land themselves in a really *weird* heaven.

The Pavilion is also really hard to draw, what with being all full of turrets and onion domes and things, but still- best place ever!