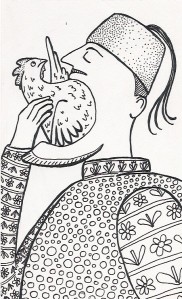 The other thing that is stopping me from becoming an Ottoman Expert is the names. First of all there is the Irritation of “Otto”. I shall concede the founding dude’s moniker was not unlike Ottoman if you are the kind that equates “lotto” with “loss”, but why not just call it the Osman Empire? You’d be less inclined to confuse it with footstools.

You could even keep the original “Osmanli”, which is adorable and distracting enough in its own right. Something about adding little “li”s to thing just makes me squee inside, whenever I see it – which is a lot, since it just means “son of”; so make that distraction number two.

Third in line is the names of pretty much everything else, especially in the beginning, which is where I’m at. Just glancing at a map even, you have Karesi from Game of Thrones, Saruhan from Lord of the Rings, Karaman from basically any fantasy novel ever; the sweeping romance of Isfendiyar and Trebizond offsetting Dulkadir – ‘Doe-A-Dear’ sung with a frog in the throat. And then you have the great and glorious Seljuk Empire -which I assure you is amazing,  sophisticated and vast and altogether extremely impressive – but something about the name puts me in mind of a man trying to swallow a chicken whole. And this image will *not* go out of my head. I am trying to *learn*something here, brain!