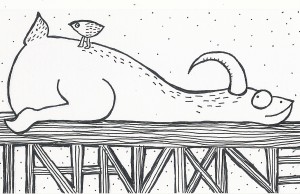 The Boardwalk Beast is best known for its peculiar and rather pointless stages of growth. Born tailless, on reaching its full length it lies down comfortably and proceeds to hatch small birdlike creatures from the nape of its neck, one by one. These grow to a certain size,  develop between 2-8 legs, and after some exploration of their surroundings eventually wander down its back to ultimately implant themselves again, becoming a sort of rabbit-tail. The bird-creatures’ legs are used to bury themselves again and are no longer visible after this stage. New creatures will hatch and repeat the process until their host is densely covered in ‘tails’.

The Boardwalk Beast’s name -sometimes misspelled as ‘Birdwalk Beast’- comes from its habitat, which, once it has reached maturity, it tends to break by the sheer weight of its rabbit-tail pelt. For this reason it is usually hunted down while still immature and unceremoniously shunted off the edge, whereon it will sputter indignantly before swimming away. Thus, by eviction or by gravity, the Boardwalk Beast’s final stage of development is as a sea creature, where its tails appear to have no impact on its life in any way.