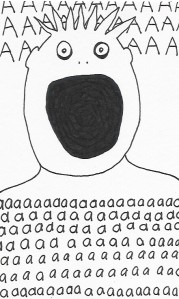 I’ve been told that the resemblance between myself today and this doodle has been uncanny, but, y’know, I had reasons! Like my books having been delayed when today I was meant to be setting my stuff up in the gallery, and me being halfway sure they wouldn’t even be done by tomorrow evening  (as had been the predicted worst case scenario). Also like arriving at said gallery to find that, instead of being wedged in somewhere with the necklaces and stuff, I have in fact been given an actual huge exhibition space with a massive table and display board and all I have is some non-existent books and a tray that was probably meant for bathroom accessories or something but which I’d decided would have to do for lack of finding a more suitable bookstand and that it was fine since I’d have plenty of time to work out a way to make the books fit in. Like *insert third thing because these things work in threes in good narrative* but yikes, I mean, aaaaa!

Now that I’ve calmed down again though I’ve decided it’s all fine, and may even be good. First of all, I NOW HAVE THE BOOKS THEY ARE BOOKS THEY WERE PRINTED THEY HAVE PAGES AND EVERYTHING and I will want to tweak them a bit admittedly but BOOKS and a guy at the print shop who as far as I know was not my friend or paid to be nice to me asked to look at them and OF HIS OWN ACCORD liked it and said they looked really fun to colour! ! And they even look like they’re going to be fine in the stand, though I am not saying that officially yet for fear of jinxes.

Second of all, I have decided it’s less of an exhibition and more of a colouring-in stand, which is much less aaaaaworthy. So I’m improvising a colouring-in stand/exhibition/something with the books, a selection of my old blogdoodles and essentially anything else I can find, including random fake flowers possibly and also Arnold and Barry whom you haven’t met yet but will be showing up shortly. It will probably be rather unprofessional-looking but should also be rather fun and if it’s raining people might just come in and do a bit of colouring which would be lovely, because I always worry about holidaymakers here when it rains.

Thirdly I am now going to breathe quietly for an hour or two. You can join me if you like. In… and out… and in… and out…